On Sunday 9 August, six humanitarian workers of the French NGO ACTED and two Nigeriens accompanying them were killed in an ambush at Kouré, some 60km away from Niger’s capital city Niamey. The victims were murdered while visiting the Kouré giraffe conservancy, a popular destination for Sundays’ leisure trips which was until then considered relatively safe. The event sparked an exceptional and widespread repugnance, because of the young age of the victims – the French were all under 30 – with the vivid images of their bodies gruesomely disfigured by bullets and burns carelessly circulating on social media just hours after the event.

In the last few years, violent attacks against humanitarian workers have become increasingly common in Africa. In their propaganda, violent (extremist) entrepreneurs manipulate strong chauvinistic sentiments by stigmatising humanitarian symbols (crosses, doves) and language (missions) as proof of an imperialist crusade that is allegedly aiming to spread Western and Christian values in Africa, whose agents are humanitarian workers, NGOs and international organisations. At the same time, African governments – including Niger’s – increasingly impose a military escort to humanitarian convoys transiting dangerous areas. Couched in the language of a comprehensive, or integrated approach to security, these practices run the risk of undermining humanitarian agencies’ foundational values to be (seen as) impartial and neutral, including vis-à-vis jihadist organisations. However, as African jihadist groups become more and more akin to armed insurgencies, with a capacity to control portions of territory and engage in governance and service delivery, their relationship with international humanitarian NGOs may become more pragmatic, leaving room for ambiguity and nuances.

The Kouré attack provides a valuable case to explore whether this variation hinges upon the Al-Qaeda vs Daesh cleavage of African jihadist formations. Groups and cells adhering to the Islamic State, including the Islamic State in the West Africa Province (ISWAP) and the Islamic State in the Greater Sahara (ISGS), operate across Niger’s borderlands. At the same time, Al-Qaeda is strongly rooted in the region through the umbrella organisation Jama'a Nusrat ul-Islam wa al-Muslimin (JNIM, Group to Support Islam and Muslims). While the two formations have appeared to coexist relatively peacefully for years, since late 2019 they are engaged in a struggle for the control of the three-border regions between Niger, Mali and Burkina-Faso.

At the time of writing, the Kouré attack has gone unclaimed. Al-Qaeda, however, had immediately issued a communiqué denying any involvement in the killing. IS-linked groups thus remain the main suspects, also due to the localisation of Kouré – closer to ISGS areas of operation – and to the brutality of the attack. IS groups in the Sahel, and perhaps more broadly, have in fact a reputation for being more ruthless and uncompromising than JNIM. In recent years, JNIM has indeed targeted humanitarians and Westerners in general, but less for the sake of violent exploits than for the more pragmatic aim of extorting ransoms from kidnapping. This is even explicitly acknowledged by one of JNIM’s leaders, Amadou Kouffa, who claimed in a 2017 whatsapp audio that if he managed to get his hands on a “white man”, he would sell him unreluctantly. In the latest of a long series of such events, in March 2020 a Canadian woman and an Italian man who had been held hostage by JNIM for 15 months were liberated, most probably in exchange of a conspicuous sum paid by the respective governments. JNIM appears to have the logistics, the contacts and the political willingness to engage in such operations, that often require long-term preparation, long-range raids, and long-endurance patience. To the contrary, kidnapping-for-ransom operations enjoy a controversial status among Daesh African affiliates. In late 2018, for instance, the availability to negotiate with the Nigerian government the liberation of the over 100 schoolgirls kidnapped by ISWAP in Dapchi (Yobe State) proved so contentious that it reportedly became one of the reasons that led to the killing and the removal of some of the group’s main leaders, including most notably Mamman Nur and Abu Musab al-Barnawi.

These approaches, however, appear to be contingent and subject to change, suggesting that doctrinal divergencies can be pliable to circumstantial needs. In 2015 and 2016, Al-Qaeda’s-linked group Al-Mourabitoune performed a string of terrorist attacks across the Sahel just akin to that of Kouré. The Radisson Blu hotel in Bamako, the Cappuccino restaurant in Ouagadougou, and the Grand-Bassam beach in Abidjan, are all popular leisure places, where Western – or Westernised – people gather, that Al-Qaeda targeted with the aim of pursuing spectacularised mass killings rather than prosaic self-financing.

The same goes for the approach vis-à-vis humanitarian workers. The Katibat Macina, a jihadist formation led by Amadou Kouffa that has joined JNIM, firstly exhibited an intransigent attitude denying access to all humanitarian organisations to the areas under its control in central Mali. In 2017, however, some local authorities managed to persuade the Katibat Macina to let the humanitarians in, so as to prevent the disruption of some service delivery that local actors were unable to provide, such as healthcare, humanitarian kits and phone network maintenance. Kouffa eventually accepted, provided that humanitarian actors demanded his authorisation to access the region, remained clearly identifiable, and deployed local, Malian, Muslim personnel. Today, the Katibat Macina wants to be seen as the protector of humanitarian assistance to local populations, ensuring the continuity of the aid flow while preventing embezzlement and frauds by local authorities and state organisations.

Yet the rise of the Islamic State has challenged the influence of the Katibat Macina in central Mali. Perhaps in an attempt to be seen as more radical challengers of the status quo, IS adherents display a much more intransigent attitude vis-à-vis humanitarian agencies and workers. Abu Mahmoud, formerly one of Kouffa’s lieutenants who has defected to the Islamic State, launched his challenge to the atibat Macina in late 2019 by raiding with his men a humanitarian convoy who had already received Kouffa’s green light to access the region of Ségou, in central Mali. According to a whatsapp audio message released soon thereafter, Abu Mahmud claimed that humanitarian action is inherently non-Muslim, and therefore its agents should be treated as non-believers: they are legitimate war targets, and their goods should be considered war spoils that can be lawfully looted. Similarly, in the Mopti region, IS fighters have pillaged village clinics, water tanks and food dispensaries because they were built and supplied by humanitarian actors, although in partnership with local authorities. Reportedly, IS-linked jihadists in the region justified their actions by claiming that humanitarians are non-believers spearheading the advance of the West and that there can be no room for their projects and belongings in the dar al-Islam.

Interestingly, Al-Qaeda and IS-linked jihadist groups in the Sahel exhibit symmetrical attitudes vis-à-vis public schools, in as much as Al-Qaeda appears to be much more uncompromising and intransigent. JNIM, and especially the Katibat Macina, have made of public schools and schooling a target of their action. Some schools have been attacked, others burnt, and a few teachers assaulted or threatened, leading to the closure of almost all public schools in the region of Mopti. In the areas where IS-linked groups are more rooted, instead, such as the Mali-Niger border, ISGS doesn’t seem to engage in any deliberate targeting of public-school buildings (even if schools remain closed, because of the overall insecurity prevailing in these regions).

Available evidence remains contradictory, making it hard to discern unquestionable trends. Overall, however, the course of action by African jihadist groups appears to depend less on rigid dogmatic frameworks than on contingent circumstances. Territorial control, resource availability (or lack thereof), propaganda aims and recruitment needs drive the tactical choices of jihadist groups about ways of dealing with humanitarian actors, mainly seen as ideologically unpleasant, but sometimes also as pragmatically useful.

(C) Christopher Herwig. The police in Kyrgyzstan needs to be reformed in a fundamental and consequent manner to start functioning according to legal provisions and statutes, and to carry out ⋙ 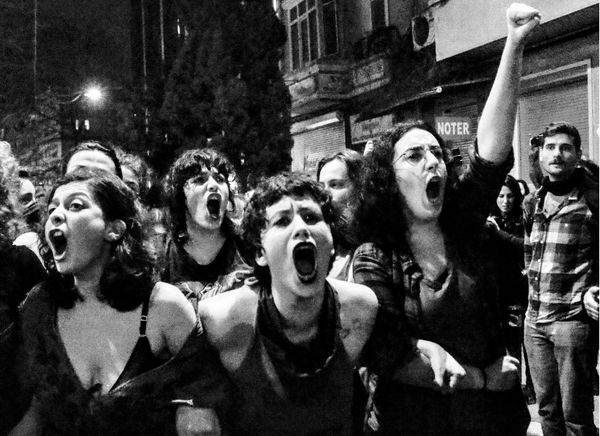 While violence against women worldwide is on sharp rise, we are also witnessing a backlash and attack against the rights that protect women from such violence. One such recent example ⋙